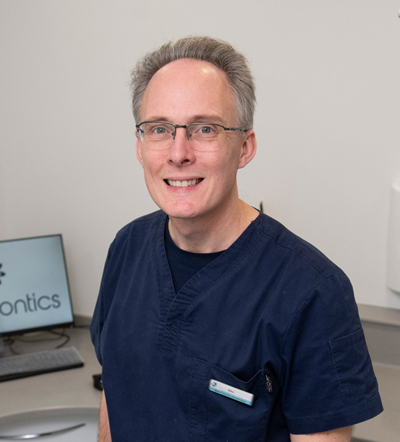 Mike has been working in dentistry for over 25 years since qualifying in 1992 from the University of Sheffield.  He initially worked in Oral Surgery, working in various hospitals across South Yorkshire and the North East, becoming a Specialist in Oral Surgery in 1999.  A career change saw him retrain in Orthodontics in Birmingham, firstly gaining his Specialist qualification from Birmingham in 2006, before returning to Sheffield to complete his Consultant training in 2008.

He has worked as a Orthodontic Specialist in various practices around the East and West Midlands since that time, before taking over Black Country Orthodontics (now Just Orthodontics) in 2015.  Since then he has worked hard to assemble a highly trained, friendly team and to expand the practice, having increased from one to three days of operating.

Mike is accredited in Invisalign, Incognito, WINN and Damon systems and is able to provide a whole of market approach to treatment offering advice and options on short-term orthodontics (such as Six-Month Smile, Quick Straight Teeth, Fast Braces, Inman Aligners) as well as more comprehensive treatment options and packages.

As a Consultant level provider Mike is in a position to manage the whole range of cases, from the most straightforward to the complex, being able to discuss all the options, the pros and cons, complete the treatment and to manage any difficulties that may occur along the way.

Mike has been involved in the wider orthodontic community, at the local level as Secretary to the Leicester Local Orthodontic Committee and as a regular attender of the Birmingham Committee, and at the national level as a former Trustee of the British Orthodontic Society where he was Chairman of the Training Group, and a member of various committees.

Away from work Mike spends many happy hours ferrying his three children around the West Midlands for various activities. He also enjoys finding time to escape into the garden, walk the family's two Dalmatians or practice his Saxophone (he’s trying to stay ahead of his son….but fighting a losing battle).